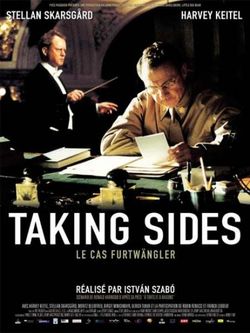 Oscar-winning director Istvan Szabo’s (“Mephisto”) “Taking Sides” is a moderately effective small-scale courtroom drama set in the immediate years after Germany’s surrender and shortly after the trials at Nuremberg. Based on Oscar-winning screenwriter Ronald Harwood’s (“The Pianist”) play the movie covers a U.S. military investigation, led by Major Steve Arnold (Harvey Keitel), of superstar Berlin orchestra conductor Wilhelm Furtwangler (Stellan Skarsgard) regarding his connection with Nazi officials to concerts that he gave for Hitler. Keitel is sublime as an arrogant badgering Army officer whose shallow comprehension of ideological differences between America and Europe blind him to Furtwangler’s defense based on his devotion to music as something separate from politics. The film keeps alive a lively political and philosophical debate regarding collaboration that is as fresh today as it was 60 years ago.
Not Rated.105 mins. (B-) (Three Stars)

Listed below are links to weblogs that reference Taking Sides: