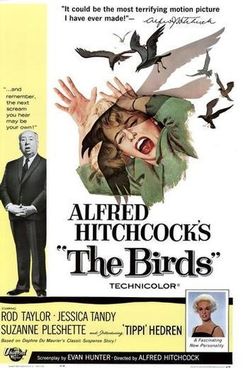 Alfred Hitchcock's 1963 follow-up to "Psycho" (1961) is an ambitious adaptation of a Daphne du Maurier story wherein the famed British filmmaker finds a full dramatic voice to connect his own fetishized sexual concerns to a socially sensitive satire of modern mores, as contrasted against a mysterious natural catastrophe. Groundbreaking on several levels of cinematic technique and dramatic form, "The Birds" combines forward-thinking special effects with an unconventional soundscape to instill a palpable lurking fear in the audience. Although not as horrifically shocking as "Psycho," "The Birds" is a more sophisticated film, and represents a high watermark in the prolific career of a true maestro of cinema. 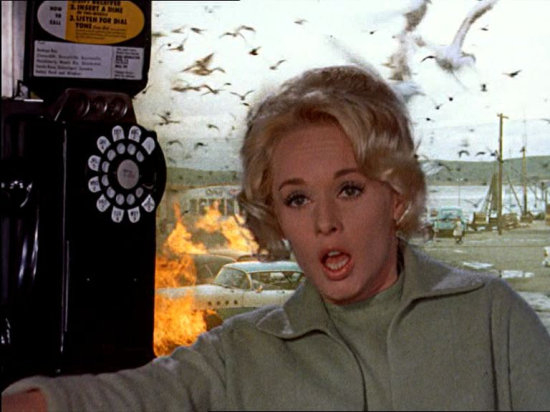 Tippi Hedren's performance as Melanie, a social butterfly that becomes caged by external conditions, is remarkable for the actress's ability to remain true to the stylized nature of the material's demands, while circumventing that limitation to render a pure vision of '60s era womanhood trapped the affection of a man (Mitch-played by Rod Taylor) whose relationship to his mother darkly informs his troubled emotional make-up. Endlessly watchable, "The Birds" is a masterpiece that can be read on many levels, providing insight into every aspect of modern filmmaking and dramaturgy. A small request: Help keep Cole Smithey writing reviews, creating video essays, and making podcasts. Click on the button to pledge your support through Patreon, and receive special rewards! Thanks a lot pal!