The Center of the World 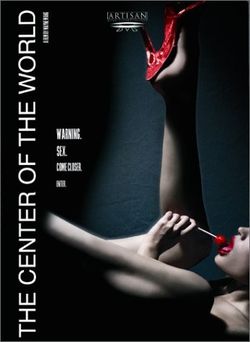 Director Wayne Wang’s unreserved take on a specific slice of American intimacy in an age of computer obsessed males and post feminist nihilistic females rings with a perfectly hollow pitch that’s a digital video punch to the solar plexus. Set primarily in Las Vegas, Wang ("The Chinese Box") explores the ramifications of a sexual arrangement between Richard Longman (Peter Sarsgaard - "Boys Don’t Cry"), a newly wealthy twentysomething computer engineer, and Florence (Molly Parker - "Sunshine"), a drummer in an all chic punk band and stripper at a lap dance bar called "Pandora’s Box." Shot entirely on digital video using different types of cameras, the movie is a modern cross between "Carnal Knowledge" and "Last Tango In Paris" for the dot com generation. Without missing a beat, Richard and Flo settle into a short and doomed affair that brings fresh emotional scars to their already damaged identities. It’s a simple, straightforward, sexually explicit movie that lets its characters make gross mistakes that audiences will interpret with all of the empathy and alienation that these two brave actors allow. Wang’s non-judgmental style lets the characters breath in a way that opens the movie up to repeated viewing although it is by no means a comfortable film.
Not Rated. 88 mins. (B) (Three Stars)

Listed below are links to weblogs that reference The Center of the World: