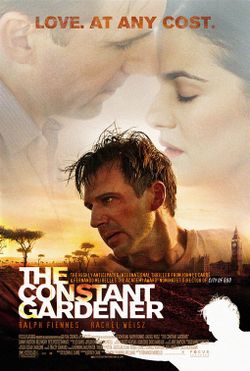 Based on John le Carre’s 2001 best-selling novel of the same name director Fernando Meirelles (“City Of God”) brings his bold signature docu-drama style to bear on a scandalous story of corporate and governmental greed. Ralph Fiennes plays Justin Quale a British diplomat whose political activist wife Tessa (Rachel Weisz) is assassinated for her discovery about a new drug (“Dypraxa”) being tested on unwitting impoverished Kenyans, many of whom perish as a result. Quale rattles the British corridors of power as he conducts a personal investigation of his wife’s death and learns not only the horrifying truth behind the pharmaceutical conspiracy but also the depth of his love for Tessa.

“The Constant Gardener” is a scathing and socially conscious political thriller filled with terrific ensemble performances directed by one of cinema’s most innovative filmmakers.