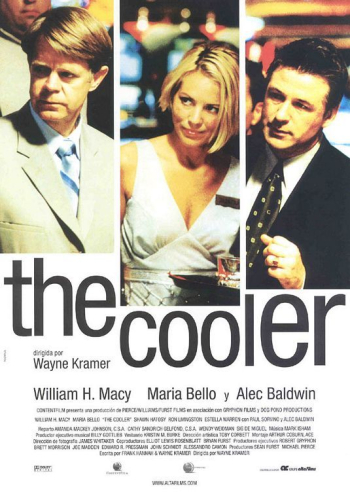 Nobody plays a loser like William H. Macy. His character Bernie's contagious bad luck finds him employed at a Las Vegas casino by a violence-prone Las Vegas mobster Shelly (hilariously played by Alec Baldwin). Bernie's mere presence puts the breaks of the winning streaks of gamblers getting hot as Baldwin's casino "The Golden Shangri La."

During Bernie's final days of working off his debt to Shelly, Bernie discovers true love with a cocktail waitress (played for keeps by the ever-terrific Maria Bello). Romance has the unintended effect of causing Bernie to lose his neutralizing affect on gamblers.

An explicit sex scene between Bello and Macy was cut from the film to avoid an NC-17 rating but has since been replaced to good overall effect for the movie. Wayne Kramer's feature debut is is a complex low-budget movie that packs a big punch.