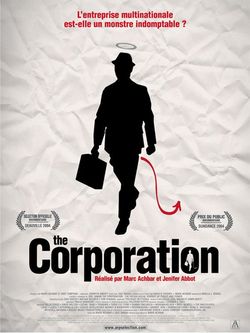 The 150-year old legal construct of the corporation, as a "person," is dissected for all to see how its lack of accountability has enabled the faulty model to become a ruling institution, acting beyond the reach of any government. Where propagandists once wielded the "iron grip of communism" as watchwords for democracy, the film makes clear that threats posed by corporate dominated capitalism are a far more insidious menace to equality and the well-being of humanity. Mark Achbar, co-director of "Manufacturing Consent: Noam Chomsky and the Media" (1994), joins Jennifer Abbott and writer Joel Bakan in examining the sweeping consequences of the corporation's ill-gotten dominance over the planet. Although the protracted film digresses in places, it is a provocative and essential piece of journalism toward regulating corporations.
Not Rated. 165 mins. (A-) (Four Stars)

Listed below are links to weblogs that reference The Corporation: