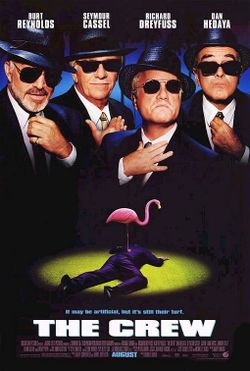 In director Michael Dinner’s "The Crew" there’s never a moment where the contrived comedic plot clicks together. Its about four former Florida elderly Mafia-type wiseguys making a return to crime by staking out some Florida turf away from the insipid young people taking over their neighborhood. The movie always seems to be out of sync with itself. The actors (including Richard Dreyfus, Burt Reynolds, Dan Hedaya, Seymour Cassel, and Jennifer Tilly) bump around in bits of low-key ‘three-stooges’ humor like they’re trying to pick spinach out of their spaghetti with scissors. There might be three or four decent laughs in the entire movie, and even those don’t come with any kind of abandon. Screenwriter Barry Fanaro (TV’s "The Golden Girls") gives too much television sensibility to a script that isn’t improved upon by gratuitous big screen explosions that pepper the under-developed comedic plot. The secret surprise to the cinema sauce of "The Crew" is Jennifer Tilly ("Liar, Liar") as a confused hot tamale exotic dancer.
Rated PG-13. 88 mins. (D+) (One Star)

Listed below are links to weblogs that reference The Crew: