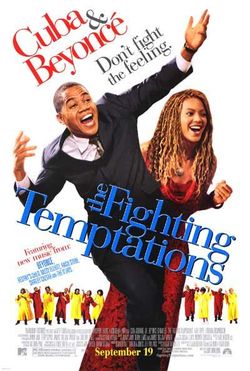 Cuba Gooding Jr. recovers only slightly from his last movie disaster ("Boat Trip") in this gospel-laced comedy that suffers from a disappointing lead up to an even less encouraging climax. Darin Fox (Gooding Jr.) is a New York advertising executive and compulsive liar who inherits the responsibility of directing his aunt's gospel choir in Monte Carlo, Georgia shortly after he's fired from his advertising job for lying on his resume. The inheritance promises to pay Darin $150,000 if he can create and lead a Baptist church choir to victory at a competition called the Gospel Explosion. The indifferent gospel music that permeates the movie never solidifies with the dramatic might that the genre is known for.
Rated PG-13. 96 mins (C-) (Two Stars)

Listed below are links to weblogs that reference The Fighting Temptations: