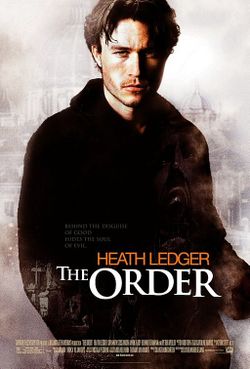 “The Order” is a halfhearted “supernatural thriller”—interpret as not an actual “horror” movie--wherein exorcism-performing rebel priest Father Alex (Heath Ledger) must travel to Rome to struggle with “sin eater” William Eden (Benno Furmann) over whether or not he (Alex) will inherit Eden’s dark post. “Sin eaters” were medieval European excommunicated priests who gave last rights to dying excommunicated people by eating bread off of their bodies to absolve them of their sins. This arcane premise quickly crumbles under writer/producer/director Brian Helgeland’s clumsy handling of his own reckless script, and miscast actors who are never believable in their assigned roles. Shannyn Sossamon is a particular embarrassment as Alex’s suicidal love interest Mara, however Peter Weller is a stand out as a corrupt and evil priest attempting to become the next Pope.
Rated R. 102 mins. (D) (One Star)

Listed below are links to weblogs that reference The Order: