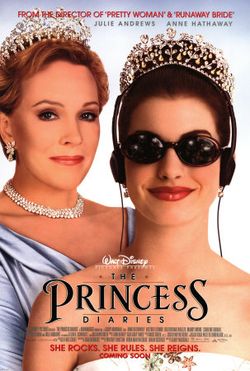 Live action G-rated movies are a rare enough species that when one comes along, parents are likely to take their budding offspring to the cinema just for the novelty of the occasion. The unexpected rewards of director Garry Marshall's ("Beaches") latest spin on the well-worn Pygmalion fairy tale are numerous. Consummated with talented newcomer Anne Hathaway as 15-year-old-nerd-turned princess Mia Thermopolis, and that grand dame of cinema Julie Andrews, "The Princess Diaries" makes the best use of San Francisco locations since "Vertigo." It's a near perfect teen romantic comedy that hits its marks with panache and grace. Garry Marshall redeems his recent film transgression of "Runaway Bride" to invigorate a girlish script by Gina Wendkos (based on the novel by Meg Cabot) into a sly and attractive film that resonates with a Billy Wilder level of attention to detail.
Rated G. 114 mins. (B+) (Four Stars)

Listed below are links to weblogs that reference The Princess Diaries :