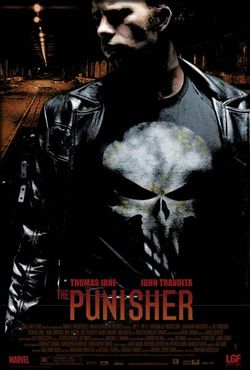 The Marvel Comics series of comic book hero movies rolls on with a disastrous film rendering of “The Punisher,” AKA Frank Castle (Thomas Jane – “Deep Blue Sea”). If you thought “Daredevil” was lousy, then you’ll be thoroughly irritated by the asleep-at-the-wheel pacing of the story of The Punisher’s origin. Tampa kingpin Howard Saint (John Travolta) kills off Delta Force Op Frank Castle’s family after Castle is involved in a sting operation that kills Saint’s son. The escalating revenge of the plot is rationalized to an act of “punishment” by Castle, who spends most of his time staying buff by working on his useless muscle car and placing guns and electronic devices around his grungy apartment. Castle does take some time out from his busy vengeance agenda to pal around with his loser apartment neighbors, which include a lovely but forlorn waitress named Joan (Rebecca Romijn-Stamos). But, on a bright note, “The Punisher” could be the movie that makes people begin to rethink the value of retaliation as a knee-jerk idea.
Rated R. 124 mins.  (C-) (Two Stars)

Posted by Cole Smithey at 11:42:00 AM in Action/Adventure

Listed below are links to weblogs that reference The Punisher: