The School of Rock 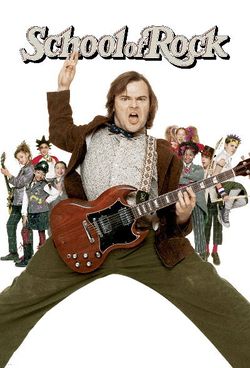 Jack Black is a one-man rock ‘n roll powerhouse in this infectious musical comedy directed by Gen X wunderkind Richard Linklater (“Waking Life”). Black plays Dewey Finn an aging anti-establishment rock guitarist whose band “No Vacancy” fires him over his ridiculous stage antics that include stage dives and 20 minute guitar solos. When Dewey intercepts a call for his roommate Ned (Mike White - “Chuck & Buck”) to substitute teach a 5th grade class at a pricey private school, Dewey decides to pose as Ned for the sake of finally paying his rent. What transpires with Black’s out-of-bounds performance as a rock music teacher is pure genius. Mike White wrote the snappy screenplay for this crowd-pleasing film that was the toast of the Toronto Film Festival.
Rated PG-13. 108 mins. (A-) (Four Stars)

Listed below are links to weblogs that reference The School of Rock: