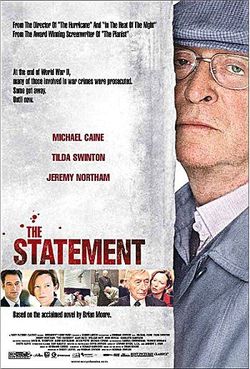 Based on Brian Moore’s novel, director Norman Jewison made this independent film about Paul Touvier, a pardoned member of Petain’s Vichy regime responsible for killing seven Jews in 1944. Michael Caine puts a human face on the Touvier character (“Pierre Brossard” in the film) as he dodges assassination attempts and a criminal investigation while relying on aid from right-wing elements of the Catholic Church all over France to protect and hide him. The film operates well as a thriller and probably goes further than intended in extracting sympathy for its reprehensible protagonist. Tilda Swinton, Alan Bates and Jeremy Northam add to the film’s well-rounded cast.
Rated R. 120 mins. (B) (Three Stars)

Listed below are links to weblogs that reference The Statement: