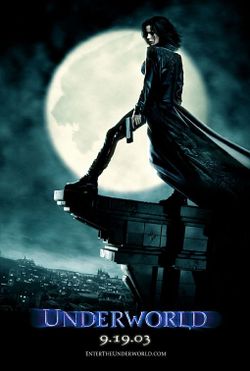 Dulled by the gauzy dark blue, gray and green color scheme that became the rage after "Blade Runner" (1982) for conveying lurid futuristic landscapes, "Underworld" is a hybrid horror and action film that succeeds as neither. Filmed in Budapest, the movie centers on a centuries-old war between a race of Vampires and a clan of Werewolves (called "Lycans"), wherein the threat of interracial mingling necessitates the awakening of the Vampire leader Viktor (Bill Nighy) from his five-hundred-years sleep by Vampire warrior Selene (Kate Beckinsale). Endless gun battles propel the movie to its sequel-demanding ending. Kate Beckinsale is enigmatic as the rebel Vampire in love with the miscast Scott Speedman as Michael, a human on the brink of becoming the first Vampire/Werewolf creature.
Rated R. 121 mins (C+) (Two Stars)

Listed below are links to weblogs that reference Underworld: