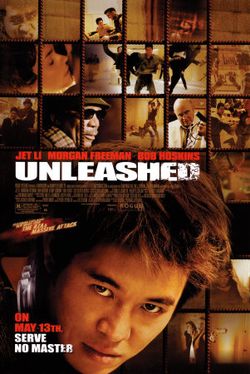 Jet Li plays a caged slave who's been raised to act as a martial arts attack dog by his loan shark keeper Bob Hoskins in collecting debts from deadbeat clients. Whenever Hoskin's character removes the metal collar from Li's neck it signals a sequence of flashy ultraviolent action. Set in Glasgow, the story follows Li's escape from his cruel keeper when he meets Morgan Freeman as a benevolent blind piano tuner and his musically gifted stepdaughter who accept the traumatized man into their family. Li's fighting sequences are unique for their street fighting style of realism and brutality in this film produced by Luc Besson and directed by Louis Leterrier (“The Transporter”).
Rated R. 103 mins. (B-) (Three Stars)

Posted by Cole Smithey at 11:04:00 PM in Action/Adventure

Listed below are links to weblogs that reference Unleashed :