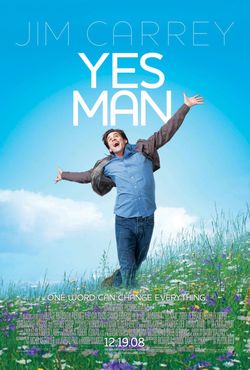 Jim Carrey's career has succumbed to painfully mediocre comedies and genre missteps for so long that "Yes Man" barely registers even as you're watching it. Carl Allen (Carrey) is like every New Yorker; "no" is his first response to anything. Recovering from a three-year-old divorce, depressed Carl is dragged by a caring co-worker to a self-help seminar led by a convincing guru (played by Terrence Stamp). Carl's following episodes of helping others and striking up a relationship with Allison (played by Zooey Deschanel), come as uninspired afterthoughts in a crumby feel-good movie about feeling good. Blech!

Listed below are links to weblogs that reference Yes Man: