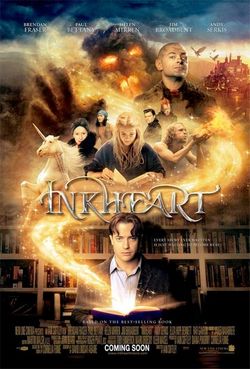 Based on Cornelia Funke's 2003 fantasy kid's novel, director Ian Softley ("The Wings of the Dove") makes a half-hearted adaptation that's further diminished by Brendon Fraser's signature boy scout performance as Mo Flochart. Mo is a "silvertongue"--that's somebody able to physically conjure up characters and elements of reality from any book that they read out loud. While on vacation in Italy with his 12-year-old daughter Meggie (Eliza Hope Bennett) bookbinder Mo finds what he's been searching for--an adventure novel entitled "Inkheart" with which he plans to bring back his wife Resa (Sienna Guillory), who was lost to the manuscript some years ago in exchange for a one of its fictional characters. Fire-juggler Dustfinger (Paul Bettany) pursues Mo to obtain the book so that he can return to his literary life within its pages. Meggie realizes that she too is a silvertongue right about the time that "Inkheart's" diabolical literary-figure-made-flesh Capricorn (Andy Serkis), makes his move with his minions to take over the world. Winged monkeys and a minotaur that you don't get a good look at make up some of the mediocre special effects in an unsatisfying kid's movie.
(New Line Cinema/Warner Bros. Pictures) Rated PG. 105 mins. (C-) (Two Stars)

Listed below are links to weblogs that reference Inkheart: