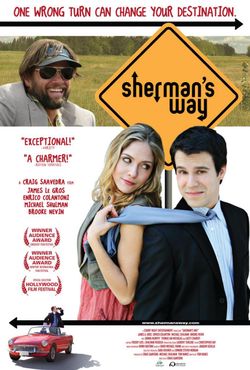 The "fish-out-of-water-coming-of-age" genre loses so much ground in Craig Saavadra's tedious indy comedy that you barely feel like you've watched a movie when it's over. Michael Shulman plays Sherman Black, a rich momma's boy from New York who can't even drive a car when he takes a trip to the West Coast only to discover that his high-maintenance girlfriend is sleeping with another dude. Sherman hitchhikes into the stolen car of ex-Olympic-skier-turned-bum Palmer (James LeGros). The guys fix up Palmer's little red MG with the help of a slacker chef played by Enrico Colantoni. Where a film like last year's buried gem "Humboldt County" elevated the genre to a soaring level of expansiveness, "Sherman's Way" shuts down before the end of the first act. This movie is a waste of celluloid and time.

Listed below are links to weblogs that reference Sherman's Way: