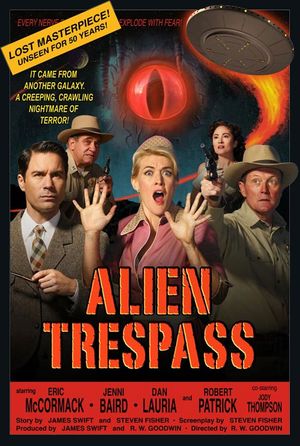 What starts out as a promising retro comic spoof of '50s era sci-fi movies (think "It Came From Outer Space") digresses into a flat imitation of the mores and social ignorance it initially promises to skewer. Writer Steven P. Fisher and director R.W. Goodwin set plenty of innuendo-laced traps--like an alien visitor with a boner--but forget to leave the oven on as the story of a crashed UFO in small town Americana unfolds. Straight-arrow scientist Ted Lewis (Eric McCormack) temporarily abandons his perpetually amorous wife Lana (Jody Thompson) to get a look at the glowing space saucer that has captured the imagination of the townsfolk, only to be abducted and have his body inhabited by an alien called Urp. Urp's sole mission is to locate and destroy a tentacled, one-eyed space monster called a Ghota busy turning locals into puddles at an alarming rate. Visually, "Alien Trespass" is beautifully filmed to pronounce its vibrancy of iridescent color. The costume designs are fantastic, and the acting ensemble gives stylistically accurate performances that could have worked to far greater effect had the screenwriter known where to push the material's wealth of comic opportunities.
(Roadside Attractions) Rated PG. 90 mins. (C+) (Two Stars)

Listed below are links to weblogs that reference Alien Trespass: