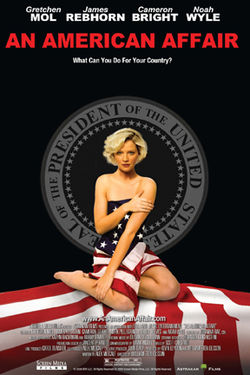 Screenwriter Alex Metcalf sets his shallow JKF assassination think piece in 1963, on the verge of the sexual revolution that the film's President-screwing, artiste mole Catherine Caswell (Gretchen Mol) flouts for her 15-year-old Catholic boy neighbor Adam (Cameron Bright). Like the rest of Washington's intelligentsia, Adam's journalist parents (Noah Wyle and Perrey Reeves) know she's damaged goods when Catherine moves in across the street from their Georgetown house. Adam spies on the frequently nude Catherine, opens her mail, and ingratiates himself to help with her garden in the back--innuendo intended--that she insists he rip up completely because "form is dead." Poker-faced Bright repeats the meaningless mantra, that the filmmakers embrace too much in their loose narrative, like he's reciting toothpaste contents. Acting wet in a rainstorm is not Cameron Bright's strong suit. Catherine's CIA op ex-husband Graham (Mark Pellegrino) lurks around for tidbits he can pass along to CIA Deep throat would-be Lucian Carver (James Rebhorn). Adam's vicarious sexual and political thrills that he gets from various bouts of eavesdropping and voyeurism do little to translate the vague intricacies of Kennedy assassination conspiracy that the film asserts. Even the famous M Street stairs from "The Exorcist" are out of place in the climax of this lightweight movie.
(Screen Media Films) R. 96 mins. (D+) (One Star)

Listed below are links to weblogs that reference An American Affair: