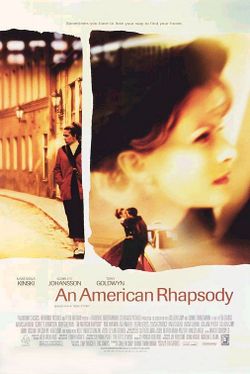 In spite of the movie’s inflated title, writer/director Eva Gardos tells an emotionally charged story of Hungarian immigration that is touching and historically accurate. Nastassja Kinski is an upper-class mother of two daughters who flees Communist Hungary in the mid-'50s with her husband and their eldest daughter. Forced to leave their baby Zsuzsi behind for their escape to succeed, the couple makes a new home in California before retrieving Zsuzsi (well played by Scarlett Johansson) six years later from an elderly couple who have raised her in the Hungarian countryside. Zsuzsi grows up in the spin of ’60s America with burning questions about her place in the world that fuel her rebellious nature and immaturity. It’s only when the 15-year-old girl visits Budapest alone that she discovers the reasons behind her parents’ terrible sacrifices.
Rated PG-13. (B) (Three Stars)

Listed below are links to weblogs that reference An American Rhapsody: