« The New Twenty | Main | The Haunting in Connecticut »

Anvil! The Story of Anvil 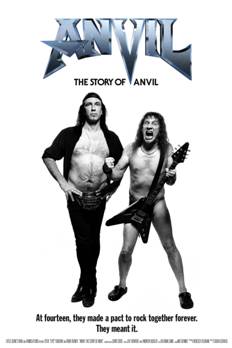 You don't have to give two cents about Heavy Metal music to appreciate Sacha Gervasi's joyous and touching documentary about charismatic Canadian musicians Steve "Lips" Kudlow and Robb Reiner who, for 35 years, have held onto their dream of making it big with their rock band Anvil. Credited with influencing a slew of successful hard rock acts including Metallica, Slayer, and Anthrax, Anvil's success peaked in the mid-'80s when they played for huge crowds with the likes of Bon Jovi. The movie starts out with Lips working his day job catering food to Canadian public schools and dreaming of spending his nights performing in local dive bars for a few fiercely loyal fans. Lips and Robb look identical enough to be the biological brothers that their highly emotional relationship reflects. A European tour, albeit a mismanaged one, puts the band's musical skill and quirky personalities on display in candid scenes that inspire more than a few laughs. When a club owner in Poland refuses to pay for the band's performance, Lips grabs the unscrupulous guy by his lapels and threatens him with real bodily harm. It's an hilarious moment that reflects the way musicians all over the world are mistreated and is a testament to Lips' personal sense of ethics. The band recovers from the financially unfulfilling tour to record their 13th album "This is Thirteen" with Chris Tsangarides, the producer of their debut album "Metal on Metal," and discovers a new meaning of success. 'Anvil! The Story of Anvil" is an unforgettable documentary about loyalty, values, and an undying commitment to music.
Not Rated. 90 mins. (A) (Five Stars)

Listed below are links to weblogs that reference Anvil! The Story of Anvil: