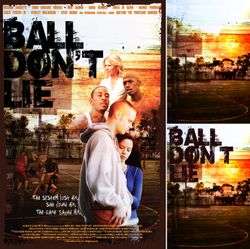 Although director Brin Hill slathers the melodrama on thick in his adaptation of Matt de la Pena's novel about Sticky (well played by Grayson Boucher AKA The Professor), a gifted young Los Angeles basketball player making it up through the local ranks, "Ball Don't Lie" precisely conveys the troubled mindset and determination of its charismatic protagonist with clear-eyed purpose. Suffering from OCD, and traumatized by years of abuse with his now-deceased mother and various adoptive families, Sticky comes into his own when he steps onto the basketball court, and the game sequences are thrilling. But a love interest distracts him from his goals and opens up a chink in Sticky's well-defended amour that his equally impoverished court buddies fill in with faulty logic. Kim Hidalgo gives a notable performance as Sticky's girlfriend Anh-thu, but it's Boucher's slow-burn intensity and unmistakable basketball skills that drive this entertaining independent drama.
Not Rated. 102 mins. (B) (Three Stars)

Listed below are links to weblogs that reference Ball Don't Lie: