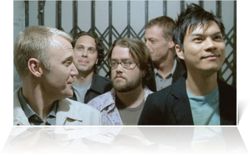 Co-writer/director Chris Mason Johnson's amateur debut effort could be credited with creating a new genre of pretentious triteness tailored to define the pop slang word "Redonkulous." Five twenty something New York characters tweak out their 2006 urban existence under the boldface stereotypes that the script demands. Our gang of ennui-ridden friends-since-college include Ben (Colin Fickes), a not-so-closeted gay guy who vainly tries to get laid via the internet, Julie (Nicole Bilderback), a female Asian corporate conqueror and her stud muffin venture-capitalist fiancé Andrew (Ryan Locke), Julie's younger gay brother Tony (Andrew Wei Lin) and Felix (Thomas Sadoski), the group's token junkie. The film's message seems to be that modern society's greedy (heterosexual), metrosexual (celibate), and gay (anxiety ridden) citizens all belong in therapy or rehab. It's a vision of a generation with nothing to offer. The only thematic relief comes from the falseness of the precept.
Not Rated. 91 mins. (D) (One Star)

Listed below are links to weblogs that reference The New Twenty: