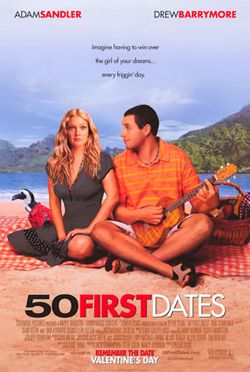 Adam Sandler teams up with Drew Barrymore after their successful pairing in “The Wedding Singer” (1998) to create a typical Sandler comedy that functions in spite of its many misfiring jokes. Henry Roth (Adam Sandler) is a womanizing fish veterinarian at a Sea World-type of aquarium in Hawaii, who falls for Lucy (Barrymore) while eating breakfast at a local diner. But after a winning first meeting, Henry finds that he has to keep starting over from scratch with Lucy because of her short-term memory loss from a car accident she had while riding with her father (Blake Clark). Sean Astin (“The Lord of The Rings”) is unrecognizable as Lucy’s lisping, steroid-taking brother, and Sandler movie regular Rob Schneider plays Ula, Henry’s Hawaiian pot-smoking friend and co-worker. “50 First Dates” (directed by Peter Segal - “Tommy Boy”) has an unexpected emotional undertow and enough hard-won laughs to make it succeed.
Rated PG-13. 106 mins. (B-) (Three Stars)

Listed below are links to weblogs that reference 50 First Dates: