« Legally Blonde | Main | THE FAST AND THE FURIOUS » 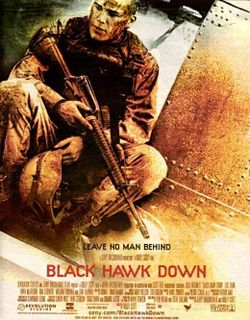 Set during a 1993 Mogadishu capture mission of Somalia's Mohamed Farrah Aidid by an elite group of US soldiers, "Black Hawk Down" is a precise vision of how little war has changed in spite of America's high-tech equipment and extensive vocabulary of modern tactics. For all of its gritty super-war-action, the film's characters remain flat, and its narcissistically patriotic ending fails to mitigate the military incompetence on display. Director Ridley Scott ("Gladiator") teams up with blockbuster producer Jerry Bruckheimer ("Armageddon") to adapt Mark Bowden's novel of the same name into a volatile mix of blood, adrenaline, and testosterone.  We hear the soldiers in "Black Hawk Down" using a private lingo to rev up their gung-ho attitude to go kill or be killed. It's an abbreviation of the "HooHa" that Pacino's character used in "Sea of Love." But here it sounds more like something Stiv Bators (former "Lords of the New Church" singer) would have yelled out in the middle of a song that went, "open your eyes, see the lies right in front of ya."
Rated R. 144 mins. (B-) (Three Stars)

Listed below are links to weblogs that reference Black Hawk Down :