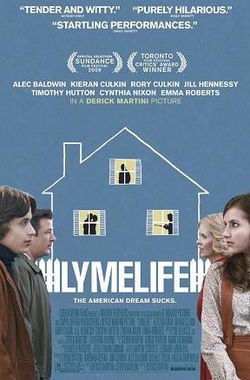 Derick Martini co-wrote the script for this surly independent suburban tour of '70s era Long Island topography, similar to Ang Lee's "The Ice Storm," with his brother Steven. Their sense of familial unity comes across in the picture's male siblings. Scott Bartlett (Rory Culkin) is the 15-year-old regular victim of a high school bully that his big brother Jim (Kieran Culkin) takes special pleasure in beating to a pulp during a home visit from boot camp that comes before shipping off to military duty in the Falklands. Papa Bartlett Mickey (Alec Baldwin) is an adulterous architect fed up with his wife Brenda (Jill Hennessy) whose obsessive fear of Lyme disease gives the film its title. The grass is less green on the side of the fence where Scott's would-be girlfriend Adrianna (Emma Roberts) has the misfortune of being parented by her gun-obsessed dad (Timothy Hutton) and adulterous mother Melissa (Cynthia Nixon). "Lymelife" is a black comedy that sticks in your throat a little too much to be an enjoyable experience. However, it does have the side effect of making its audience feel superior to the characters on the screen.
(Screen Media Films) Rated R. 94 mins. (C)

Listed below are links to weblogs that reference Lymelife: