« The Fast and the Furious | Main | Guest of Cindy Sherman » 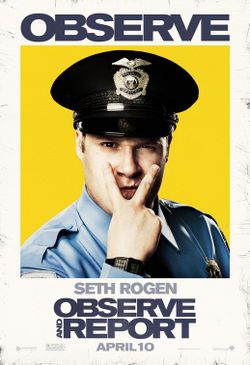 Writer/director Jody Hill makes a quantum leap from his low-budget 2006 debut feature "The Foot Fist Way," with a hilarious subversive black comedy about America's post-911 culture of authority-abusing misfits commonly referred to as security guards. Seth Rogen plays Ronnie Barnhardt, a racist, sociopath security guard who's far more Travis Bickle than Paul Blart. Ronnie is the bipolar head of security at the Forest Ridge Mall where a trench coat-wearing flasher accosts the object of Ronnie's wrongheaded affection, a vapid make-up counter clerk named Brandi (brilliantly played by Anna Farris). The arrival of local no-nonsense police detective Harrison (Ray Liotta) threatens Ronnie's ego to the point that he decides to apply to become a police officer after Harrison drops Ronnie off in a deadly ghetto to fend for himself. The film's title spells out in no uncertain terms the limits of authority for security guards obsessed with checking your bag and wanding your body at public entryways. The film is a take-no-prisoners satire that rises to the level of Martin Scorsese's 1982 milestone "The King of Comedy." The audience is continuously kept off balance by Jody Hill's unconventional use of slapstick humor offset by straight-to-the-heart dialogue and over-the-top plotting. Seth Rogan's performance is beyond perfect, and supporting efforts by Ray Liotta, Celia Weston, and Michael Pena are spot-on. "Observe and Report" is a diabolical send up of authoritarian culture.
(Warner Brothers) Rated R. 106 mins. (A+) (Five Stars)

Listed below are links to weblogs that reference Observe and Report: