« Lymelife | Main | Wallace & Gromit: The Curse Of The Were-Rabbit » 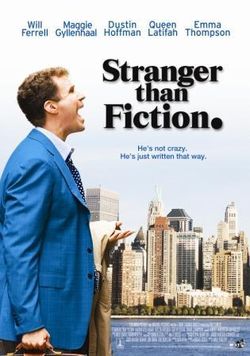 This high-concept comedy falls prey to its substitute voice-over gimmick wherein neurotic novelist Kay Eiffel (Emma Thompson) verbally instructs the life of her protagonist Harold Crick (Will Ferrell). Little does Kay realize that Harold is a real living and breathing human being attempting to escape her mysterious voice as it instructs every movement and inevitability of his life. Harold’s existential crisis worsens because Kay’s writer’s block depends on finding a way to end her novel with his death. Queen Latifah puts a wet blanket on the movie as a drab publishing representative sent to motivate Kay to finish her overdue novel. Chicago Internal Revenue Service agent Harold strikes up a romance with Ana Pascal (Maggie Gyllenhaal) in the midst of auditing her for unpaid taxes. “Stranger Than Fiction” is a sterile and pedantic comedy that tells much more than it shows.
Rated PG-13. 115 mins. (C-) (Two Stars)

Listed below are links to weblogs that reference Stranger Than Fiction :