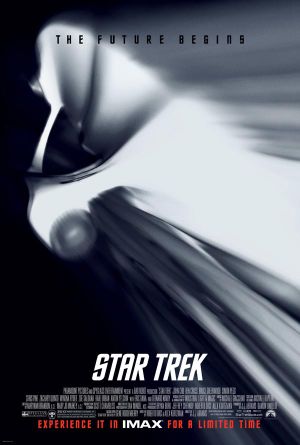 Fusing a carefully chosen cast with stunning sci-fi spectacle and a storyline that retains the workmanlike elements of Gene Roddenberry's original television series, director J.J. Abrams ("Mission Impossible III") successfully forms a new beginning for the Star Trek franchise. Going back to the calamitous astral circumstances of James Tiberius Kirk's birth, the story builds as the young rebellious Kirk (Chris Pine) joins the Starfleet Academy. Fast friendships, rivalries, and romantic overtures connect Kirk to Dr. "Bones" McCoy (Karl Urban), Spock (Zachary Quinto), and Uhura (Zoe Saldana) before the crew is thrust into the thick of their first mission aboard the latest version of the Enterprise. Dark Romulan leader Captain Nero (well played by an unrecognizable Eric Bana) sets a trap for the Enterprise to enable the destruction of the planet Vulcan and Earth. Abrams savors establishing the relationships and quirks of Roddenberry's Star Trek characters that arguably outshine every other sci-fi on-screen legacy. The ensemble succeeds in capturing the essence of his or her iconic character, and an extended cameo by Leonard Nimoy adds considerable flavor to the exhilarating spectacle on hand.
(Paramount) Rated PG-13. 126 mins. (B+) (Four Stars - out of five)

Listed below are links to weblogs that reference Star Trek :

I spearheaded a successful drive to have "Star Trek" honored on a U.S. postage stamp, so I am more than a casual fan of the show. Your review is so strong and so promising that I can barely contain myself waiting for the new Trek film to arrive. I dearly hope that the box office will justify more sequels and spark new life into an iconic franchise.