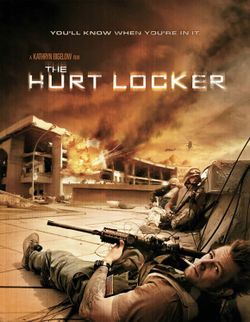 Director Kathryn Bigelow's powerful Iraq war drama begins with the premise that "war is a drug," and proves that postulate with a thoughtful character study of Staff Sergeant William James, a bomb specialist played by Jeremy Renner. As part of a U.S. military Explosive Ordinance Disposal team stationed in Bagdad, Sergeant Williams takes a cavalier approach to diffusing roadside, and otherwise installed, explosives. He's not quite suicidal, but Williams' unconventional fearlessness severely worries other members of his team, to the point that they imagine it might be better if he weren't around. Former embedded journalist Mark Boal's script takes an episodic form to transmit the heightened degree of stress that these type of soldiers endure on a moment-by-moment basis. The film supports the idea that extended exposure to certain kinds of experiences have the effect of either galvanizing a participant or breaking them, if they are fortunate enough to survive. In WWII, war was hell, in Viet Nam it was numbed by drugs, but in today's version of extreme conflict, war is the drug. Supporting the troops is not what you think.
Rated R. 130 mins. (A) (Five Stars)

Listed below are links to weblogs that reference The Hurt Locker: