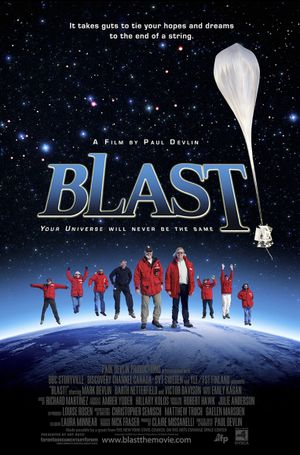 Anyone with the slightest twinge of celestial curiosity in them will enjoy Paul Devlin's earnest documentary about the efforts of his astrophysicist PhD brother Mark and a team of adventurous young scientists as they launch BLAST--"Balloon-borne, Large Aperture, Sub-millimeter Telescope, to take thousands of intoxicating pictures of deep space. The movie is as much about the attitudes and work ethics of the crew, that consists largely of students getting hands-on experience, as it is about the team's tribulations invloved with exectuing such an ambitious and complex project. After an imperfect attempt at capturing the histories of ancient galaxies, that takes the balloon-tethered telescope from Artic Sweeden to coldest Canada, the team returns to launch a much improved version of BLAST in a circular pattern around Antartica. The payoff is a fascinating lesson in the Earth's microscopic place within the vast reaches of space. It's a history class like no other.
Not Rated. 74 mins. (B) (Three Stars)

Listed below are links to weblogs that reference Blast!: