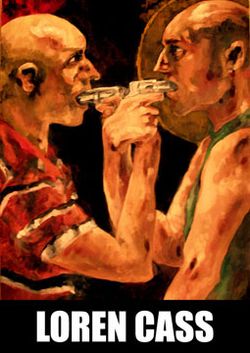 "My fiction beats the hell out of my truth." That suggestive line from first-time filmmaker Chris Fuller's dead-end portrait of suburban American dystopia cuts like a knife across the dramatic heart of an original and gutsy drama captured on 16mm film. The setting of St. Petersburg, Florida circa 1997, could just as easily be the racial battleground of Richmond, Virginia circa 1977. Suicidal and homicidal rage seethe like so many pots on the boil in the lives of car mechanic Cale (played by Fuller) and skinhead lowlife Jason (Travis Maynard), two young working class friends living in the wake of the 1996 St. Petersburg race riots. Teen gangs randomly jump other kids on empty streets and in characterless parking lots where the physical violence Fuller shows is brutally real. Most inspired is the way Fuller editorializes over the film's socially charged scenarios with public speeches, by the likes of black activist Omali Yeshitela, and poetic commentary from varying voices of topical thought. The third act inclusion of the televised suicide of Pennsylvania politician Budd Dwyer at a press conference contributes to the film's underlying ripple effect of such violent acts.
Not Rated. 83 mins. (B+) (Four Stars)

Listed below are links to weblogs that reference Loren Cass: