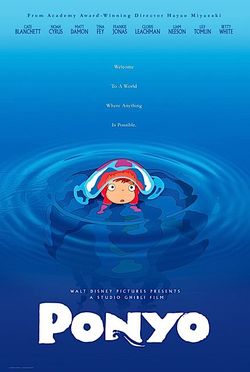 Anime maestro Hayao Miyazaki, best known in America for his 2001 film "Spirited Away," stays true to his common themes of nature, elderly people, and polite children with an American-dubbed version of his Japanese mini epic "Ponyo on the Cliff by the Sea." Inspired by Hans Christian Andersen's "The Little Mermaid," this beautifully animated film is set in a small Japanese seaside village where five-year-old Sosuke (voiced by Frankie Jonas) lives with his mother Lisa (voiced by Tina Fey) in a modest cliff-top house. Sosuke is thrilled when he discovers a goldfish trapped in a glass jar in the surf near his house. He names the unusual fish with a human face Ponyo (voiced by Noah Cyrus). Little does Sosuke realize that he holds the ability to transform the fish he adores into a little girl his own age, or that such a transformation could threaten the delicate balance of the global ecosystem. Ponyo's seafaring father Fujimoto (voiced by Liam Neeson) is a kooky individual with a wild shock of long orange hair married to Ponyo's mother Granmamare (voiced by Cate Blanchett), a divine goddess of the sea. "Ponyo" is an entertaining fantasy movie for kids in which painstaking attention is given to balancing physical reality with magical fantasy. Already a hit in Japan, it's an instant classic of children's animation.