« As Seen Through These Eyes | Main | Afterschool »

New York, I Love You 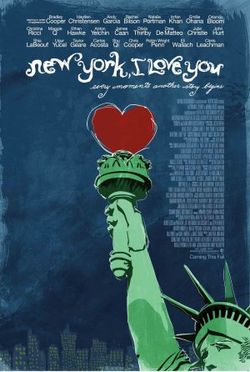 Inspired as an American reply to his earlier story-collage movie "Paris, je t'aime," producer Emmanuel Benbihy extends his anthology oeuvre with another collection of various directors contributing a story set in a particular urban environment. Like "Paris je t'aime," "New York, I Love You" unrolls as a hit and miss proposition of weighing each (would-be) charming vignette against the last one in succession. Brett Ratner pulls out a plumb with his romantic coming-of-age segment staring Anton Yelchin, James Caan, and Olivia Thirbly. Director Yvan Attal kicks out a winner with his romantic reverie starring Maggie Q, Ethan Hawke, Chris Cooper, and Robin Wright Penn. However, less favorable efforts from filmmakers like Mira Nair and Shekhar Kapur throw off the film's otherwise innocuous sequence of mildly interesting dramatic bubbles. Grab bags are always fun, but the junk outweighed the goodies with this one.
(Vivendi Entertainment) Rated R. 122 mins. (C-) (Two Stars)

Listed below are links to weblogs that reference New York, I Love You: