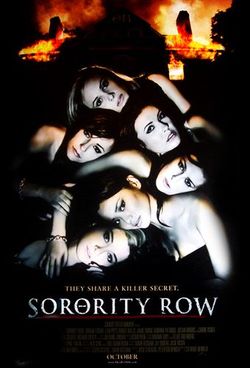 Worse even that its insipid script (co-written by Josh Stolberg and Peter Goldfinger) is Elliot Greenberg's editing of a meandering slasher pic notable only for the number of nubile bare breasts that it manages to fit into nearly every other scene. Ostensibly based on Mark Rosman's 1983 slasher effort "The House on Sorority Row," the movie sets up a batch of wrongheaded sorority chics hosting a blow-out party that clearly answers the difference between a sorority house and a circus--one is a cunning array of stunts. The clique hatch a complex scheme to punk frat boy Garrett (Matt O'Leary) making bedroom moves on Megan (Audriuna Partridge) after giving her a ruffie. Megan barfs foam and seems to die, resulting in clique leader Jessica (Leah Pipes) taking Megan, Garrett, and her gang to an abandoned mine shaft to prolong Garrett's freak-out from thinking that he's killed Megan. In his panic, Garrett does indeed retire Megan with a tire iron. The sworn-to-secrecy chicks drop Megan's body down a well and go back to living a 24/7 party until a black shrouded figure starts knocking off related kids and adults alike eight months later. I wish I could say that there was one redeeming reason to see this movie, but there isn't.
Rated R. 101 mins. (D) (One Star)

Listed below are links to weblogs that reference Sorority Row: