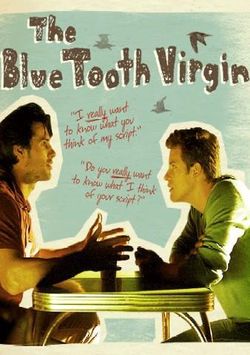 So pretentious it stinks from the screen, "The Blue Tooth Virgin" is a stillborn experiment in screenwriting 101. One-man-show Russell Brown (he writes, produces, and directs) records stagy discussions of the screenwriting idiom between bromance buddies Sam (Austin Peck) and David (Bryce Johnson). Sam is an out-of-work entertainment writer--he had a popular TV series called "Cat's Paw Print"-- working on a "character-driven" script that David thinks is complete garbage but can barely bring himself to tell Sam. "The Blue Tooth Virgin" bears all the marks of a navel-gazing attempt at drawing attention to an unrepentant void of mediocrity. Karen Black is squandered in one truly pathetic scene where she plays a New Age therapist to rich artsy-fartsy types like Sam. "The Blue Tooth Virgin" is more of a skeleton of a movie than ghost. It certainly won't haunt you, or anybody else.

Listed below are links to weblogs that reference The Blue Tooth Virgin: