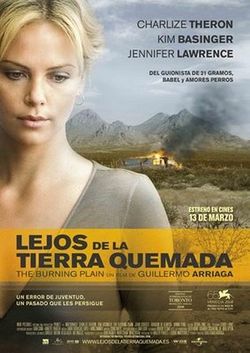 White blonde women are omens of doom in screenwriter Guillermo Arriaga's arduous directorial debut. Arriaga (screenwriter of "The Three Burials of Melquiades Estrada" and "21 Grams") resorts to his favored time-flipping narrative format in order to delay revelations about New Mexican-born Sylvia (Charlize Theron), now living in Portland, Oregon. There she indulges in meaningless sex to try to block out a past that will inevitably catch up with her. Parallel to Sylvia's story is a narrative concerning a white family of six back in New Mexico, overseen by adulterous matriarch Gina (Kim Basinger). Gina is conducting a hot-and-heavy tryst with a Mexican immigrant. Gina's daughter Mariana (well played by Jennifer Lawrence) becomes aware of her mother's secret and turns to tragic action to express her disapproval. At it’s the film's heart is a story of Mexican immigrants whose romantic encounters with Caucasian women spell disaster. Dramatically flawed by overwrought plotting and one especially unconvincing character of dubious motivation, "The Burning Plain" flirts with a racial thesis that it is unequipped to support.
(Magnolia Pictures) Rated R. 111 mins. (C-) (Two Stars)

Listed below are links to weblogs that reference The Burning Plain: