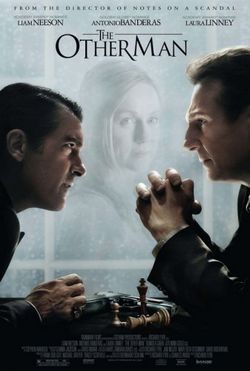 Liam Neeson's successful software mogul Peter enjoys a perfect European life with his haute couture shoe-designer wife Lisa (Laura Linney) and their twenty-something daughter Abigail (Romola Garai) in Richard Eyre's problematic revenge fantasy. In its first act Lisa lets Peter know that she has cheating on her mind over a fancy dinner, before vanishing from his life a few scenes later, leaving behind the words "Lake Como" scribbled on a scrap of paper, and a message from her lover Ralph on her cell phone. Peter sees red and sets about tracking down Ralph (Antonio Banderas) in Milan, where his wife's former lover lives as a well-dressed bon vivant seducer by day, and as a lowly apartment building superintendent by night. Without showing his hand, Peter strikes up a friendship with his rival, and the men's chess games at a local bar generate what little dramatic conflict the story has to offer. Peter sends Ralph baiting e-mails disguised to be from Lisa, whose belated fate is eventually revealed in one of the most incoherent bits of storytelling to come around. Stagy to a fault, and painfully uneventful, "The Other Man" suffocates from the pitiable writing on display.
Rated R. 89 mins. (D) (One Star)

Listed below are links to weblogs that reference The Other Man: