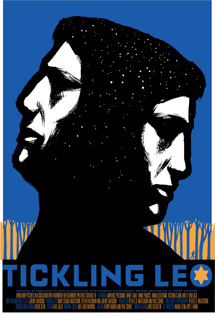 Ostensibly about Holocaust guilt, writer/director Jeremy Davidson's poorly scripted, filmed, and executed drama plays out like an unfinished low budget soap opera. The proverbial poop hits the fan during Yom Kippur when estranged Jewish son Zak Pikler (Daniel Sauli) takes his pregnant girlfriend Delphina (Annie Parisse) to visit his dementia suffering father Warren (Lawrence Pressman) in the Catskills where papa Warren nakedly inhabits the house that he once shared with his now deceased wife. Davidson's inept attempt to shoehorn in a family secret subplot based on actual WWII events involving Rudolph Kastzner's dicey ransom arrangement with Adolf Eichmann for 1,600 Hungarian Jews, comes off as an afterthought. Shot on digital video, "Tickling Leo" is a cautionary example of just how awful such technology looks without a competent lighting designer. This film should never have gotten a theatrical release.

Listed below are links to weblogs that reference Tickling Leo: