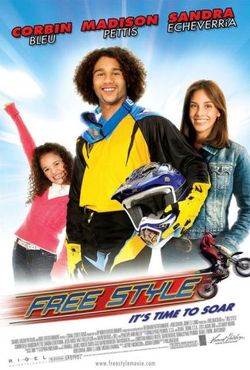 Soft-peddled father issues, and race relations get coasted over like so much conveyor-belt product in director William Dear's oh-so-safe kids' romantic sports drama. Corbin Bleu (of "High School Musical" fame) plays Cale Bryant, a 16-year-old motocross racer who spends his time working two part-time jobs to help take care of his mom (Penelope Anne Miller) and feisty little sister. Cale is vying for a spot on a motocross tour but loses to his best friend just as he loses his girlfriend Crystal (Tegan Moss) to his biggest rival. A new girlfriend (Sandra Echeverria) and a refurbished motorcycle later, and our pretty boy protagonist is ready to take on all the obstacles life can throw at him. "Free Style's" made-for-television production values make it a big screen movie to avoid.  The film's wrongheaded approach to the real issues in American life that it pretends to confront, comes out in an exchange between Bleu's character and his little sister when she asks him if their family is black or white. "We're whack" he tells her.

Listed below are links to weblogs that reference Free Style: