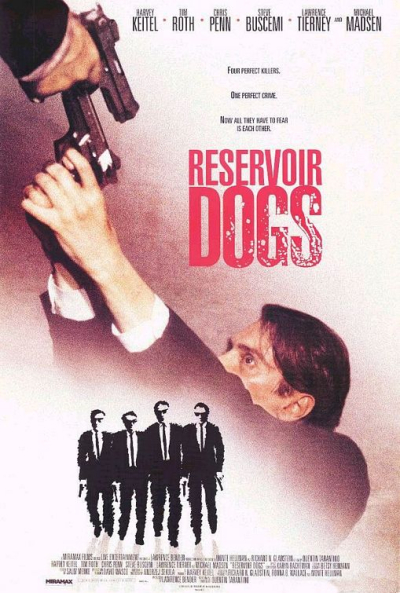 In 1992 Quentin Tarantino did something that hadn't been done since 1986 with David Lynch's "Blue Velvet;" he reinvented cinema. A deft application of an originally voiced time-flipping narrative, Tarantino's "action" script is a filmic illusion worthy of Hitchcock or Welles. This minimalist masterpiece is the real McCoy. It was an instant classic the moment it first played in Cannes.

The main conceit of Tarantino's deconstructed bank heist story is that the film's "action" occurs after the heist. Well-constructed flashback sequences and flashy monologues impose an emotional undercurrent of back-story on every dramatically inflected scene.

Each of Tarantino's six black-suited robbers is known to the others only by his color coded pseudonym. Eddie Bunker plays Mr. Blue, the director himself plays the chatty Mr. Brown, Harvey Keitel is Mr. White, and Steve Buscemi is Mr. Pink.

Suffering from a belly gunshot wound sustained during the heist, Mr. Orange (in Tim Roth's gutsy portrayal) is an undercover cop sincerely befriended by Keitel's character. Left bleeding in the gang's warehouse, Roth's Mr. Orange witnesses the psychotic Mr. Blonde (manically played by Michael Madsen) torturing a young cop named Marvin Nash (Kirk Baltz) to the funky lyrical strains of "Stuck in the Middle With You (Stealers Wheel). Tarantino's brutal counter-point doesn't just sucker punch his unsuspecting audience in the solar plexus; the effect goes for the heart and groin as well. 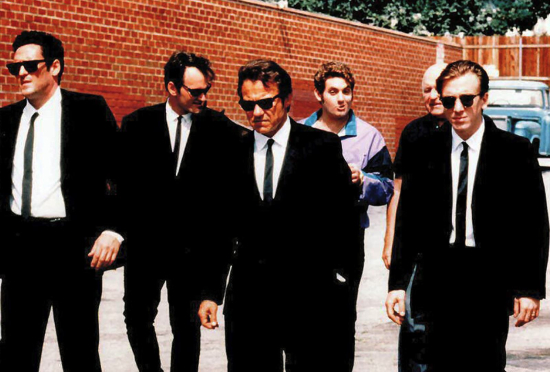 "Reservoir Dogs" is a flawlessly conceived picture whose theatrical design pivots on Tarantino's touches of Grand Guignol shocks. "Reservoir Dogs" created a sub-genre of crime suspense copycats, of which Troy Duffy's "The Boondock Saints" (1999) is one of the most embarrassing examples. Over his career, Quentin Tarantino's films have proven everything that "Reservoir Dogs" seemed to promise and still achieves. Freshness and raw passion.