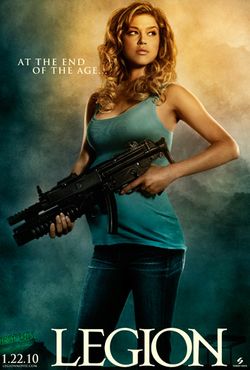 A reckless attempt at flipping apocalyptic holiness on its head with an army of demonically possessed angel-zombies led by one evil Gabriel (Kevin Durand), "Legion" is a disaster of a disaster movie. The ever-committed Paul Bettany, like his co-actors Charles S. Dutton and Dennis Quaid, does a lot with a little but inevitably surrenders all integrity to an insultingly gratuitous body count movie.

Archangel Michael (Bettany) falls to earth, cuts off his wings, and gathers up an arsenal of guns big enough to hold off the local SWAT for at least six hours. At a desolate diner run by Quaid's everyman loser Bob Hanson, in the middle of the Mojave desert, Charlie (Adrianne Palicki) is an eight-months pregnant waitress  romantically attached to Bob's mechanic son Jeep (Lucas Black). Charlie's unborn baby and soon-to-be-tattooed boyfriend may just be humanity's last hope. A burly traveler (Tyrese Gibson) and a dysfunctional couple with a misfit daughter are present when Michael arrives to help them fight off an ongoing attack from genocidal angels who must be fired upon like crop-dusting with bullets.

There's a fumbled thematic excuse that "God got tired of the bullshit and decided to wipe out humanity." In regard to the amount of bullshit in this movie, the audience will likely be on God's side.