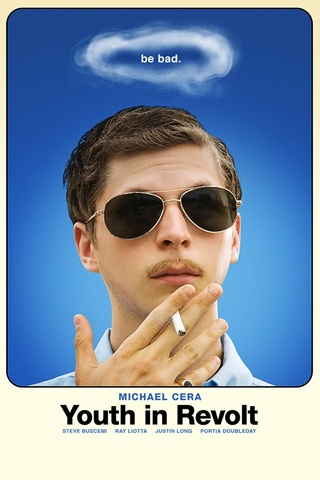 Nick hopes to end his virginity when he runs into the similarly nerdy but super-cute Sheeni Saunders (Portia Doubleday). Some Ill-conceived advice from Sheeni ("become a bad boy") prompts Nick to create a dual identity in order to win over Sheeni.

Thanks to a pencil-thin mustache and Euro-chic clothe, Nick reinvents himself as François, an alter ego with a penchant for various criminal shenanigans involving cars, drugs, and fire. That Sheeni's parents happen to be religious freaks (played by Emmet Walsh and Mary Kay Place) only adds to the kookiness of the adult world that Nick navigates like a bull in a china store. Over the course of just a few films, Michael Cera has established himself as one of the most enjoyable young comics of his generation. Cera's scenes with Ray Liotta (as a local cop dating Nick's mom) are priceless. He may not be Holden Caulfield, but in this day and age Nick represents a fresh breeze of youthful rebellion.