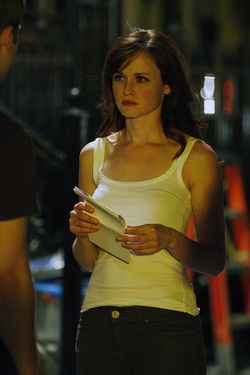 In case you didn't get the memo, Wall Street guys are obsessed with money to the exclusion of everything else--except for the "good guy" who's even less interesting than the greedy frat boys that he only resembles in appearance. Asleep yet? Manhattan is the setting. Wolf-raised Wall Streeter Tommy (Scott Porter) promotes office wallflower Daniel (Bryan Greenberg) to a demanding job on his investment bank's sales floor. Daniel proves an apt apprentice to Tommy. But Tommy makes the timeless cinematic mistake of letting Daniel get too cozy with his girlfriend Beth (Alexis Bledel). Crass dialogue, the plot development of a Tom & Jerry cartoon, and a cast of instantly forgettable actors add up to a romantic drama that enriches your life simply by not being seen. Debut writer/director Julio DePietro has done something amazing—he has created a movie as dull as its title.

Listed below are links to weblogs that reference The Good Guy: