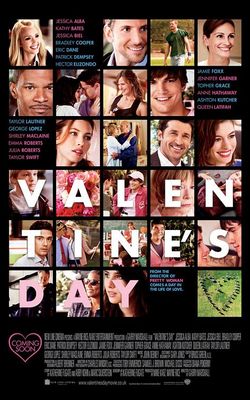 "Valentine's Day" is yet another date movie that's less than the sum of its parts. The sheer number of A-list actors involved spells trouble. Jessica Biel, Julia Roberts, Jamie Foxx, and Anne Hathaway provide cast padding for the likes of B-listers Taylor Swift, George Lopez, and Emma Roberts. Intertwining romantic threads weave a haphazard pattern in the City of Angels where Ashton Kutcher plays Reed, a pink-shirt-wearing flower shop owner who prematurely proposes to Jessica Alba, playing a typecast role as Morley, a snooty little minx who rejects his offer. Reed's platonic gal-pal-since-childhood Julia (Jennifer Garner), is dating a doctor with big secrets, and has her own love lessons to learn. Anne Hathaway falls on her actor's sword as Liz, a temp office receptionist who has a sideline as a phone sex entertainer when she isn't pursuing a "simple" relationship with Topher Grace as her doormat-to-be. With half as many sub-plots the filmmakers might have been able to keep the plates of passion spinning atop their spindly knees. As it stands, by the time Liz's office boss Queen Latifah experiments with some off-hours phone sex as an African dominatrix, there's far too much broken china for anyone to escape without bloody feet. Screenwriter Katherine Fugate, whose credits include "Xena: Warrior Princess" and "Max Steel," should stick to her day job as a TV writer. Hollywood is full up with hacks as it is.

Listed below are links to weblogs that reference Valentine's Day :