« Chloe | Main | THAT OBSCURE OBJECT OF DESIRE — THE CRITERION COLLECTION » 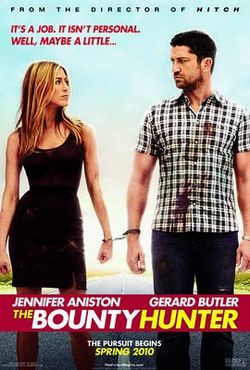 Only when savvy movie audiences refuse to pay good money for Hollywood's never ending barrage of annoying formula romantic comedies will the big studios get the message that they have to do better. Predictably short on romantic chemistry, but surprisingly big on violence "The Bounty Hunter" casts Gerard Butler as ex-cop-turned-bounty-hunter Milo Boyd. Milo is thrilled no end when he's offered the job of capturing his ex-wife Nicole (Jennifer Aniston) whose job as a Daily News hack writer distracted her from a court appearance for assaulting a police horse with her car. There isn't a single laugh to be had in this shoddy flick whose inflated production costs could have far better served any number of national social causes. Aniston has turned into a caricature of herself, and it's not a pretty sight. For his part, Gerard Butler's accent becomes so grating that the actor really should spend some time with a voice and diction coach. Screenwriter Sarah Thorp ("Twisted") stubs her toe hard with a script that feels like it was farted rather than written. Send Hollywood a message, and do not see this film.

Listed below are links to weblogs that reference The Bounty Hunter: