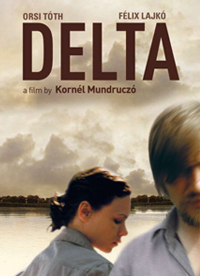 Having played in competition at the 2008 Cannes Film Festival, Korneo Mundruczo's plaintive contemplation of the deceptive duality between natural beauty and nature's immutable laws--as both broken and inflicted--"Delta" is an art house film of the first water. Mihail (Feliz Lajko) returns to his rural Hungarian home where his mother introduces him to Fauna (Orsi Toth), a younger sister he didn't know he had. Anxious to distance herself from her mother's callous lover (Sandor Gaspar), Fauna attaches herself to the passive loner Mihail who plans to build a nontraditional home on stilts in the region's peaceful delta. Damned from the start for their ostensibly incestuous relationship--though the pair never engage in sex together--Mihail and Fauna accept their tenuous place as social outcasts with a calm resolve that gives the piece a quiet sense of hope. But the provincial villagers that congregate at the bar that Fauna's mother operates, make clear their rabid disapproval of the sibling's choice to live together. "Delta" poses myriad questions about the meaning of family, community, love, and of man's quest for happiness. It is not an easy film, although there is an ease of confidence about it. Love it or hate it, "Delta" is a film you will not forget.

Listed below are links to weblogs that reference Delta: