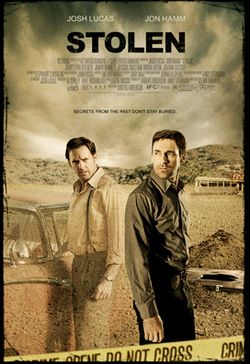 In the strongest cinema season for mysteries in a cat's life, Anders Anderson's debut thriller is the most anemic offering in an otherwise solid batch that includes "The Red Riding Trilogy," "Mother," and "The Girl With the Dragon Tattoo." The square-jawed Jon Hamm plays detective Tom Adkins, a tortured soul seeking closure over the abduction of his 10-year-old son eight some years ago. Adkins's daily obsession gets some traction with the discovery of a young male corpse from 50 years earlier that promises to shed light on his own son's cold case. First-time screenwriter Glenn Taranto shows his immaturity with a time-flipping narrative that keeps flashing back to a story about a father (Josh Lucas) and his three sons who are forced to split up after his wife's suicide. The performances are strong in a film done in by its awkward two-pronged approach. One poorly told story would be bad enough but with "Stolen" we have two.

Listed below are links to weblogs that reference Stolen: