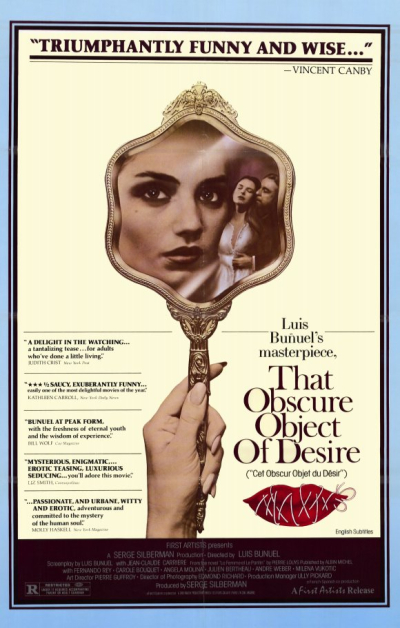 This film was swan song of Luis Buñuel's 50-year career as surrealism's preeminent filmmaker. It expands on a corollary between romantic dysfunction and societal collapse.

Terrorist attacks and public address announcements about violence from leftist and rightist extremists underlie Mathieu's self-defeating attempts to make love to Conchita, whose hot and cold personality drags out their romantic entanglement beyond the brink of frustration.

Much has been made of Buñuel's decision to fire Maria Schneider before replacing her with Bouquet and Molina, but Buñuel and Carrière had originally discussed interchanging two actresses for the role when they co-wrote the script. Buñuel's use of yet a third actress to voice Conchita's dialogue to bring a subconscious unity to an ostensibly bipolar character.

"That Obscure Object of Desire" (1977) makes its playful attitude apparent during its opening, when Fernando douses a bandaged Conchita with a bucket of water on a train platform., Mathieu shares his story with a woman and her young daughter and a curious Freudian psychologist (who happens to be a dwarf) on the Seville-to-Paris train. Mathieu explains his hostile actions by proclaiming the woman he dumped water upon to be "the worst of all women."

Told in flashbacks, the story of his love-at-first-sight affair with his former maid plays out as a comedy of confused social mores among people who should know better. Mathieu and Conchita each display equal amounts of sadomasochistic behavior. Neither is able to transfer their remote inner passions into carnal action. Aside from its psychopoliticosexual theme, the film is an endearing love letter to the cities of Seville and Paris; their sunny locales carry an amusing sense of longing and personal history. Buñuel finesses the unrequited love between his characters with such a command of cinematic spontaneity and humanity that you could watch it a hundred times. Genius. 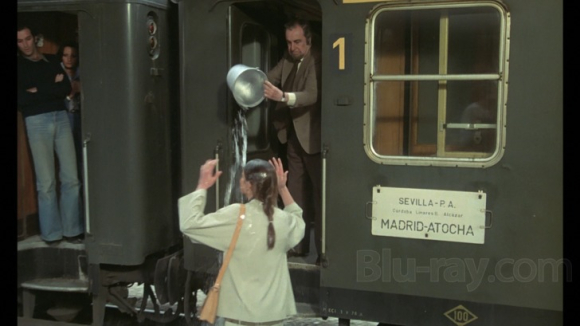